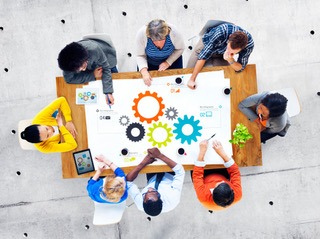 One of the biggest complaints I hear from clients is that they have to attend too many meetings. It’s a totally fair gripe: according to the Bureau of Labor Statistics’ Time Use Survey (yep, they survey this stuff), American workers spend an average of 8.7 hours per week in meetings.

And I know plenty of people who would argue that that number is way too low. So here are some timely tips for making your meetings more meaningful, productive, and, yes, even fun.

1.    Ask yourself if a meeting is the right way to get the job done. Would a focused work session be a better alternative? A brainstorming group? A conversation with one or two colleagues? If you’ve ruled out all the other ways to accomplish your goal, then go ahead – schedule your meeting.

2.    State the purpose of the meeting and back it up with a written agenda. All meetings should have a clear objective that’s easily measured by the meeting’s end, meaning you either achieved the goal (decision made, information gathered, etc.) or you didn’t. If you didn’t get what you wanted, schedule another meeting or find another way to get the desired result. But never go into a meeting winging it.

3.    Invite attendees selectively. It’s become a backwards sort of corporate status symbol to get invited to lots of meetings. When you’re the inviter, determine whether you really need a cast of thousands or if four or five people would accomplish more. At Amazon, Jeff Bezos has declared that no meeting should require more than two pizzas to feed all attendees. While that sounds like a breezy rule of thumb, there’s solid evidence that the more people invited to a meeting, the more productivity goes down. Think about those calendar invites before you send them.

4.    Watch the timing.  Just because a meeting is long, doesn’t mean it’s effective. Choose a timeframe that sends a “we mean business” message, like a 22-minute meeting. Or consider a 10-15 minute “standing meeting” or a “morning huddle” where everyone stays on their feet, literally, for the duration. Try an unusual start time like 9:19 am to get people’s attention. Then, start on time, resist the urge to backtrack to fill in late-comers (shame on them), and end on time, resolution or not. People will not only be more willing to attend your meetings, but they’ll come prepared.

5.     Set strict guidelines and enforce them consistently. Once you’ve stated the meeting’s purpose in a written agenda, invited the right people, and started the meeting on time, make sure you adhere to the objectives at hand, preferably three or less. If anything is off-topic, park it by writing it down on a “parking lot list” and assign ownership to someone to follow up at a later time. Consider parking your devices outside the conference room door, too.

6.    Have a little fun. Start your meetings with something unexpected once in a while: ask everyone to share a personal tidbit, bring some food, tell a joke, start with an icebreaker, give away some swag, or do a quick go-round about the upcoming weekend. Send a message that says while you mean business, you can still have a good time together!

Stay tuned for the launch of my new book, The Hope-Driven Leader: Harness the Power of Positivity at Work. You can pre-order it on Amazon now!