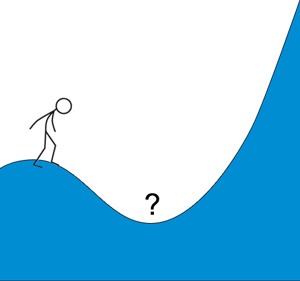 I don’t know. Have you ever considered, you know, giving up? That could be your best solution to that stuck space you’re in.  You’re not shocked, are you? It happens all the time.  Only most people don’t talk about it, because we’ve been raised from our earliest years to pick a goal and stick with it until we’ve got it nailed. Or until it nails us. Either way, it would be a shame to actually quit, right? Not really.

I tell a lot of people not to give up on their goals, even when the going gets rough.  But sometimes giving up is the best way to go.  In fact, sometimes it’s the only way to go.  In his book, The Dip, Seth Godin calls it “strategic quitting.” This is the kind of quitting that you do mindfully, weighing the pros and cons of sticking with your current batch of dreams. Or dropping them quickly and getting a new batch of dreams instead.

Of course we quit things all the time – with various degrees of thought and effort.  Quitting a lousy relationship may require some serious thought, but little effort once the decision is made.  Quitting smoking, on the other hand, is a no brainer but requires a high degree of effort.

But what about quitting a career? Or a business that you started and have thrown everything into? What about that four-year plan of academic study that you’re already three years into? It seemed like a smart career move three years ago, but now the market has completely changed and there’s no demand for that educational background anymore. Do you stick it out just because you started it?

I’m sure you’ve heard the expression, “Don’t change horses in mid-stream.”  You know when that made the most sense?  When we were still riding horses! Now the world changes so fast, with market demands rising and falling so rapidly you can’t keep up – or even predict with a 100% certainty what the next Big Thing will be. (I mean, Pinterest? Really? Who would have guessed?)

So how do you know when to quit? And how do you know when to stick to it? Godin says that the key is knowing the difference between a dead-end mission or a dream that is simply in the midst of a  “dip,” which is a trough of discouragement that separates the dreamers from the true achievers. Here are some scenarios you might want to consider:

The world has moved on from your favorite dream.  Don’t despair if there’s no longer a market for what you thought for sure would be your ticket to prosperity. All those skills and contacts you’ve developed in preparation for becoming the person you thought you wanted to be will position you perfectly to becoming the new person who is truly relevant to today’s (and tomorrow’s) world. You just have to figure out who that is now.  Who’s the new best you? And what’s the shortest path to your reinvention?

Your dream is still world-relevant.  But you’ve discovered that you hate it. How many doctors, lawyers, engineers or – you fill in the blank – have accomplished all that hard educational training only to discover they don’t like the work?  First make sure you really, really don’t want to pursue that life anymore. And when you’re absolutely sure, walk away as fast as you practically and responsibly can. The world is dropping dreams as quickly as it can to find new and better ones. (Remember Friendster? Videotape? Walkman?) There’s no reason why you shouldn’t move as quickly in your own life, too.

You still love your dream but you’re feeling deeply discouraged or impatient.  This is the sign that you may be in a dip. Godin astutely points out that dips separate the ordinary dreamers from the true superstars.  They are that endurance test that tells the world how passionate and patient you really are to invest in that far-away dream.  Only you can make that decision, but it’s nice to know in your most discouraging days that maybe you’re just in the dip. And soon you’ll spring out of it, having paid your dues in time, patience and effort.

No one can tell you what choice to make, of course. This decision can only be yours.  Whether you ultimately decide to stick it out or get out altogether, factor the option of quitting into your assortment of choices. It may be that only by making the decision to quit that you can get to the dream that means the most to you.